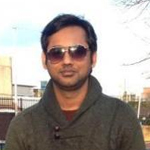 His area of expertise is bioanalytical method development for analysis of small molecules (biomarkers, metabolites, drugs etc) in biological samples using LC-MS/MS. Abhinav’s research work started with a short project (metabolomics of hypoxic stress using high resolution mass spectrometry) placement with Beatson Laboratory, Glasgow, UK in 2009 (April-September). During his PhD (in collaboration with Southmead hospital, Bristol, UK) he used HILIC and RP liquid chromatography with mass spectrometry and electrochemical detection systems in order to analyse polar, non-polar compounds and biomarkers in complex biological samples. He developed and validated many LC-MS/MS (SRM) methods for the analysis of polar and non-polar compounds (and metabolites) in human serum and urine for pharmacokinetic and pharmacodynamics studies.

In the Zitzmannlab, Abhinav worked as Postdoctoral Research Associate where he was involved in biomarker discovery and quantitation and looked for post-translational modifications as biomarkers for NAFLD. The techniques he worked with include TMT based discovery, targeted PRM and DIA based quantitation using the Q-Exactive mass spectrometer and Skyline. Abhinav also developed a HPLC method for the quantification of an iminosugar (UV-4) in human plasma.